Posted on 29 December 2012 by yonetici in For the home, Icons | Comments Off on Juicy Salif Model

Not all squeezers are actually meant to squeeze. Perhaps the most famous example of this is the Juicy Salif, designed by Philippe Starck in 1990. It is considered an icon of industrial design that has been displayed in New York’s Museum of Modern Art. It is manufactured by Italian kitchenware company Alessi. Its diameter is 14 cm, height 29 cm, and it is made from cast and polished aluminium. As the founder of the company Alberto Alessi recalls “I received a napkin from Starck, on it among some incomprehensible marks (tomato sauce, in all likelihood) there were some sketches. Sketches of squid. They started on the left, and as they worked their way over to the right, they took on the unmistakable shape of what was to become the juicy salif. While eating a dish of squid and squeezing a lemon over it, Starck drew on the napkin his famous lemon squeezer.” 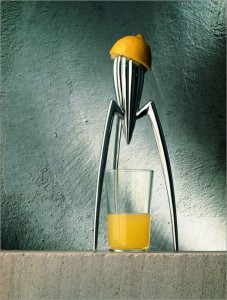 how it is used

For the tenth anniversary of its launch, 10,000 were individually numbered and gold plated. There has also been a grey/black (Anthracite) coloured version of which 47,000 un-numbered examples were produced between 1991 and 2004. Both now are collectors items, though an urban legend perpetuates that the anthracite version is rarer than the gold plated version. 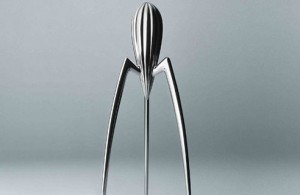 The gold plated version was described as an ornament because the citric acid in a lemon discolors and erodes the gold plating. Starck even said his squeezer was, “not meant to squeeze lemons” but “to start conversations”. 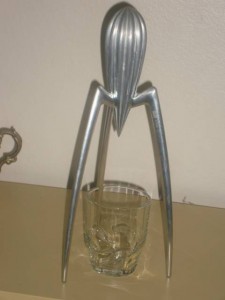 One bought from the market