Modeled this after extensively measuring the dimensions of the instruments I have, which are;
Olds Ambassador Cornet,
King Master Cornet,
Holton Collegiate Cornet and
Bach Prelude Pocket Trumpet. 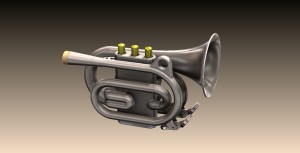 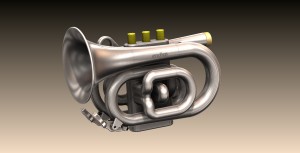 The other side view.

The air path gets wider all the way from the mouthpiece to the bell as it should in a cornet (excluding the valveblock area ).
The mouthpiece is a 5B, as close as possible model of a well known cornet mouthpiece with wonderful sound.
All parts are made or divided into smaller units, enabling this to be printed by using almost any printer, small or large.
As usual I guess it will be a challenge to have the valves operate properly. 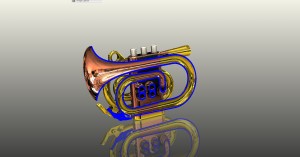 END_OF_DOCUMENT_TOKEN_TO_BE_REPLACED

Posted on 23 January 2015 by yonetici in Music, Products | Comments Off on Full Size Printable Trumpet

I’ve made a full size trumpet recently. Several people from different countries have printed and tested it, reporting some good news. 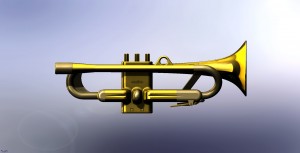 Side view of the 3D model 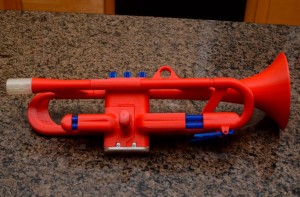 One printed at the states.

Read more to view the detailed renders of the 3d model and download the STL files for printing your own.